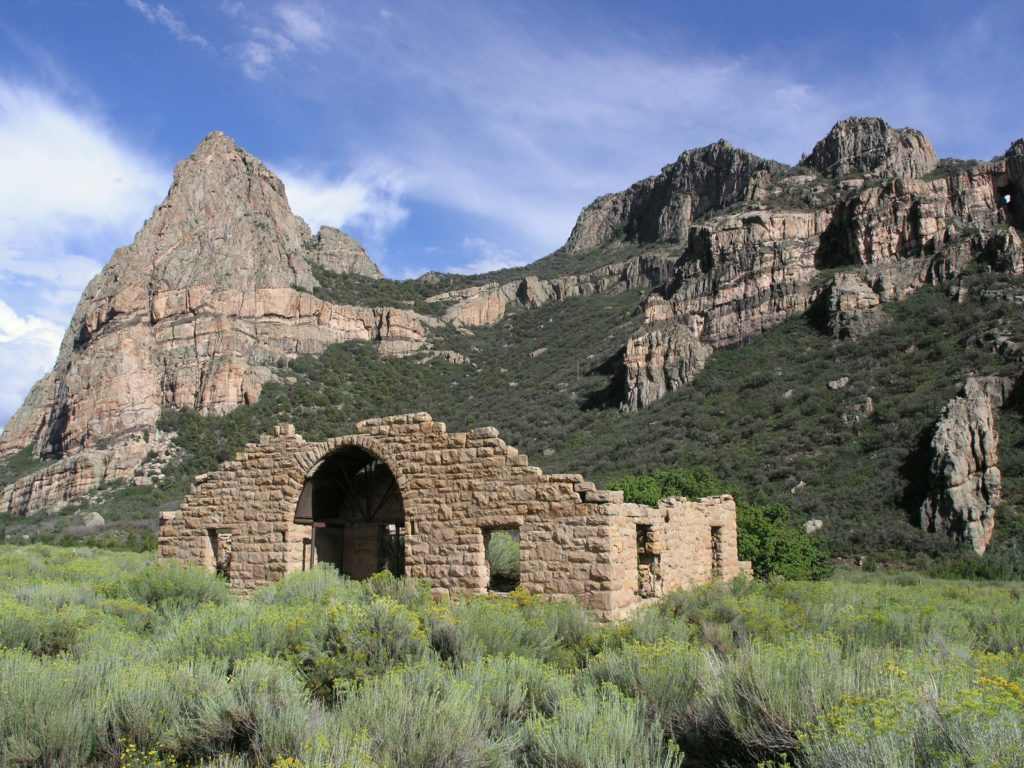 The ruins of Driggs Mansion with Thimble Rock in the background. 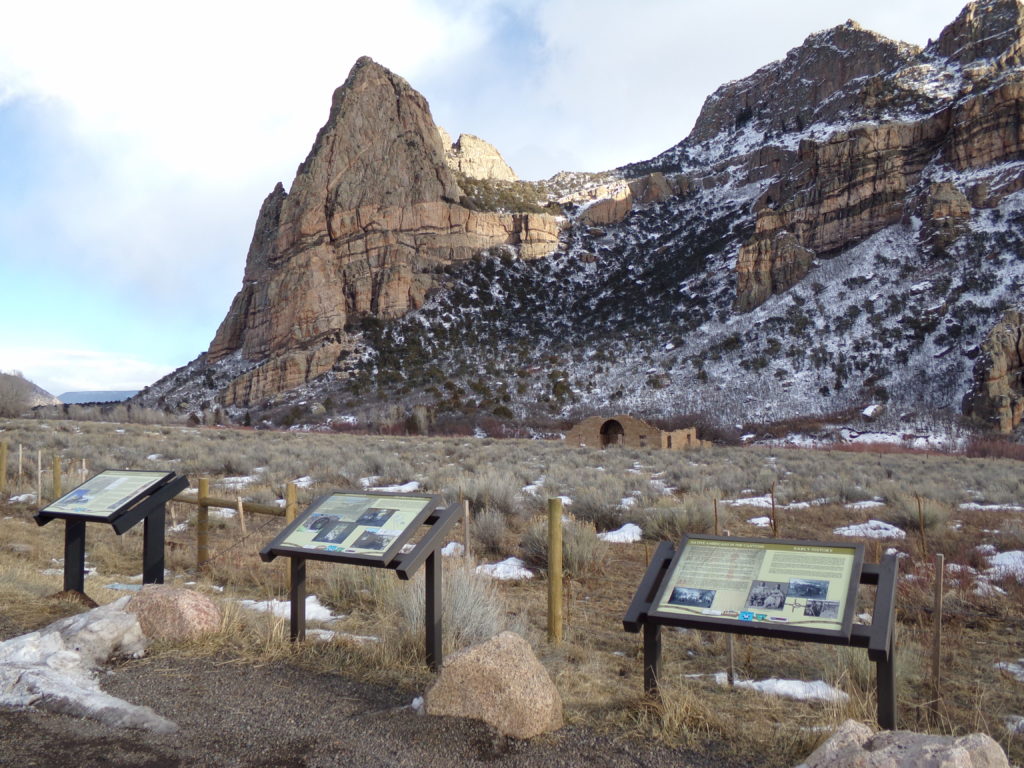 Signage conveys the history and geology of the Unaweep/Tabeguache Scenic and Historic Byway.

Reprinted from a Mesa Land Trust Newsletter in 2007

A conservation agreement between John Hendricks and the Mesa Land Trust provides permanent protection for a key parcel in the heart of Unaweep Canyon. Sitting at the base of the 1,200 foot outcrop known as Thimble Rock, and including the iconic Driggs Mansion ruins, the Gil Meadows conservation easement preserves 114 acres along the Unaweep/Tabeguache Scenic Byway.

The conservation agreement prohibits non-agricultural commercial or residential development of the property and allows the land owner to stabilize or restore the Driggs Mansion ruins. The land includes irrigated hay ground and a quarter mile of riparian habitat along West Creek. It is bounded on the south by BLM and Forest Service Land. In addition to its beauty, the land provides critical winter range for the Uncompaghre and Pinon Mesa elk herds.

Unaweep Canyon is a geologic oddity with openings at both ends of its length. The property lies just west of Unaweep Divide, which separates the two creeks, East and West, that drain the respective portions of the canyon. Because Unaweep is open at each end and its streams are so small as compared to the granite walls that rise thousands of feet from the valley floor, geologists believe that a large, pre-historic river carved the canyon.

In addition to its natural beauty, travelers along the Scenic Byway often stop to view the sandstone ruins of the Driggs Mansion and learn its history. Completed in 1918 and including an arched entrance way modeled after Thimble Rock which towers above it, the six room house was to be the residence of Colonel Laurence LaTourett Driggs of New York and his wife. Local legend has it that within months of moving in, Mrs. Driggs insisted upon leaving the isolated canyon.

The property, dubbed “Chateau Thimble Rock,” was sold to three Grand Junction residents and used as a hunting camp through the 1930s. For the last seven decades, the property was owned and ranched by a Unaweep Canyon family and was acquired by John Hendricks in 2005.

“Mesa Land Trust is honored to work with John Hendricks to protect this incredibly beautiful property,” said Rob Bleiberg, Mesa Land Trust’s Executive Director. “Unaweep Canyon is one of Colorado’s spectacular places and this property will serve as a cornerstone for additional conservation work.”

With the officially designated Unaweep/Tabeguache Scenic and Historic Byway running through Unaweep Canyon, the protected property provides for scenic enjoyment by locals and tourists alike. “Driggs mansion, now in ruins at the base of the ever impressive Thimble Rock reminds us of the hard working history behind ranches in Mesa County and of our need to protect the lands which contain our true Colorado heritage,” added Mesa Land Trust Land Protection Specialist Ilana Moir.

2020 Update: Today Driggs Mansion looks much as it did when the land was conserved in 2007, however, the structure has now been stabilized to prevent further damage and new signage at the byway overlook provides an overview of the geology and history of Unaweep Canyon.

Working with farsighted landowners, like the Hendricks, CWLT has conserved over 4,000 acres along the Unaweep/Tabeguache Scenic & Historic Byway, including Beeman and Jessie Casto’s 740 ranch in 2015. You can see their story here.