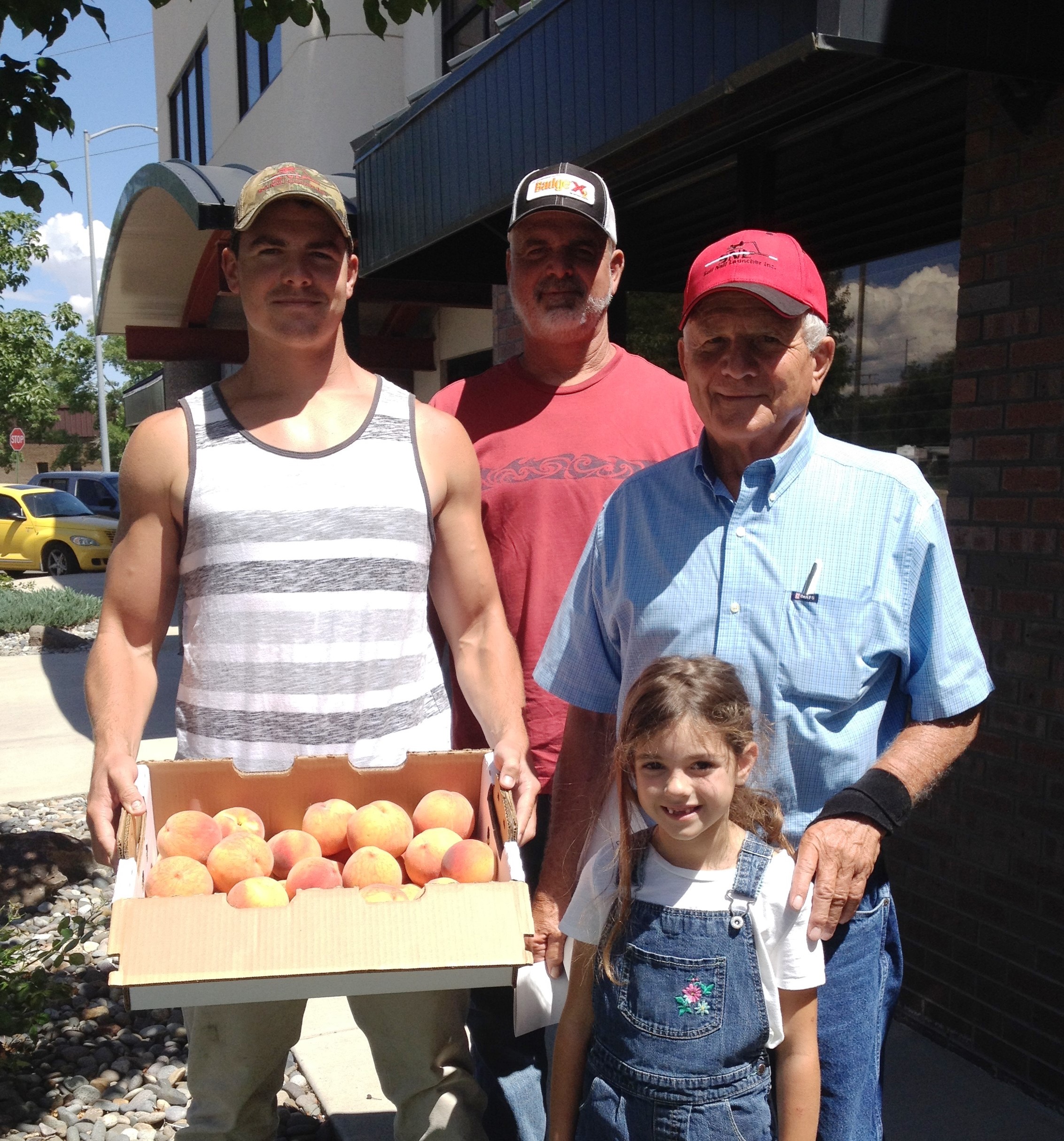 On a sunny September morning, Al Ruckman shares his bounty with a visitor to his East Orchard Mesa farm–a handful of blackberries from the patch near his house; a ripe peach plucked from the orchard just beyond the front pasture. A box of newly harvested tomatoes, cucumbers and jalapeno peppers sit in the barn waiting for family members to drop by and help themselves.

Like a lot of farming families, several of Ruckman’s grown children and grandchildren live within a few miles of one another.

Roses grow in front of Ruckman’s Victorian-style house that his late wife Sue designed and son Terry built. Looking north toward the peach orchard, Mt. Garﬁeld looms impressively above the trees. As a teenager, Ruckman worked on his family’s farm north of town–a farm that gave way to development years ago. A civil engineer by trade-his business Geo Stabilization ﬁxes landsides–Ruckman also loves farming. He passed on the heritage to his son Ted and grandson Nick.

Together, the family took measures to preserve prime farmland on East Orchard Mesa when they placed 17 of their acres in a conservation easement in 2016. The Ruckmans farm a total of 45 acres, 18 of which is owned by Bob Barrett, and was already conserved.

“You can’t develop it. That’s what we want, for [this land] to stay in farming,” Ted Ruckman said. “It gives you a sense of long-term security to know it will always be in agriculture.”

His father Al adds: “In the 1970s and early ’80s, they were carving up East Orchard Mesa severely. If they’d kept going there wouldn’t be a fruit business here anymore.”

Proceeds from selling their development rights to Mesa Land Trust will allow the family to purchase additional property for Nick, who plans to continue farming. That land, too, will be conserved, said his dad.

The Ruckmans ﬁrst heard of Mesa Land Trust from neighbors who had conserved their property. Family members learned more about the program while attending a Western Colorado Horticultural Society convention in Grand Junction, where they met Ilana Moir, Mesa Land Trust Director of Conservation.

Our whole intention,” said Ted Ruckman, “is we don’t want it to be developed. We want to keep it in the family and keep it in farming.”

2020 Update: Al continues to farm alongside his son, Ted, and his grandson, Nick. Given the freeze damage to peach buds back in April, Al acknowledges that they were hit pretty hard, quickly adding that so were other farmers in the Grand Valley and that they are all taking it in stride.

When a few staff and board members visited Al earlier in the year to talk about having the spring picnic at his house (pre-COVID-19), they planned at his kitchen counter while eating freshly baked cookies and sipping on apple cider. He then gave them a tour of his beautiful property and convinced Dillon to eat a little red pepper that he swore was not hot but definitely was. Hot peppers aside, Al has been such a charitable host to the Land Trust crew in the past that we were naturally saddened to have to cancel this year’s picnic, but he assured us that we are always welcome guests at his home.

We are so grateful to the Ruckman family for their ceaseless hospitality and for their shared vision to ensure our connection to land for future generations.