One hour from Grand Junction and 15 miles west of the Glade Park Store, a metal gate leads to the original log cabin home of Anna Roehm Lawson, who has lived on this land since she was ten days old. A friendly young hound and an elderly dachshund greet us. Anna is already busy in the kitchen, talking on the phone. She welcomes us into the newest addition to the multi-sectioned log home, where she is surrounded by a variety of felines who adorn the furniture. A very vocal chihuahua settles quietly into her owner’s lap. 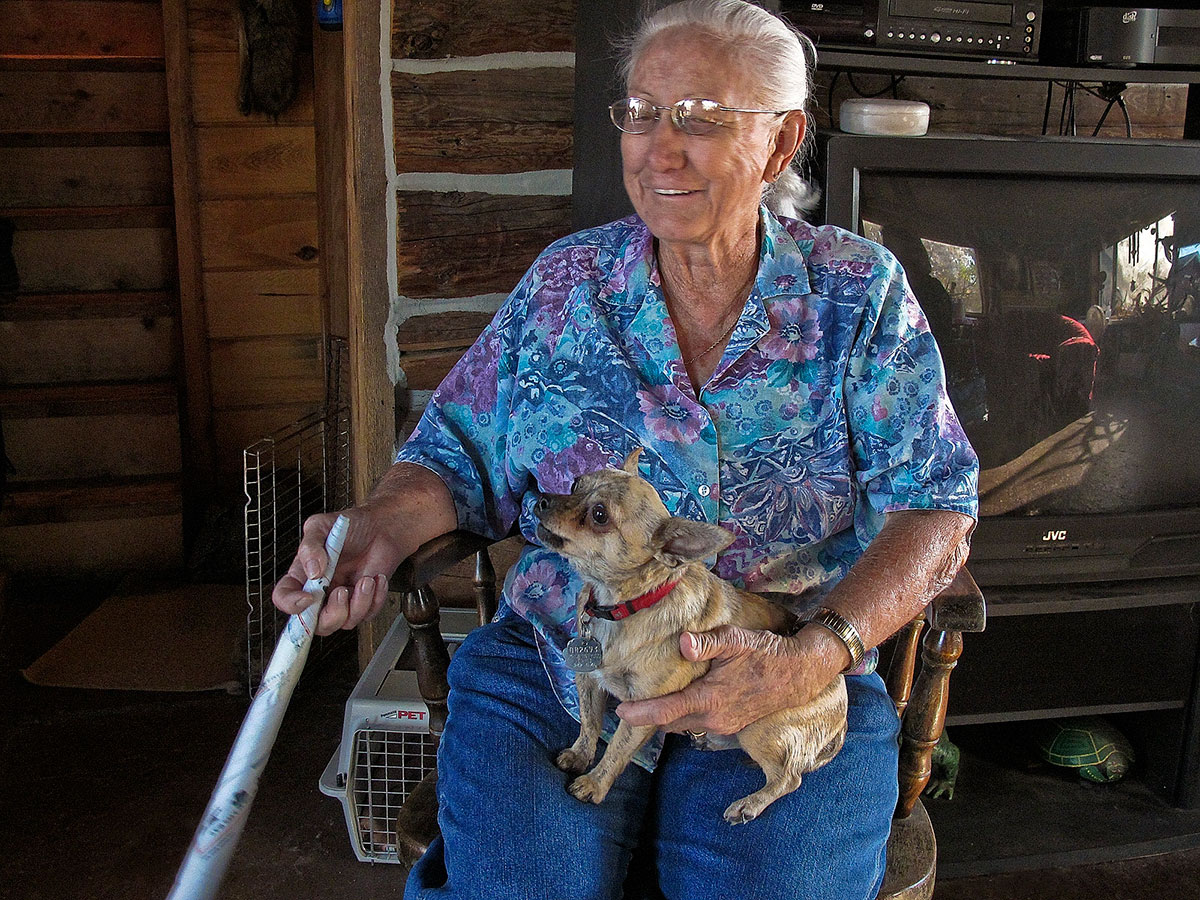 Anna invites us into a semicircle of chairs, where we are joined by her younger son Mike, who lives next door with his family and manages the ranch. We ask her what it has been like living here for over 80 years. She thinks for a minute. “I was born in 1929. Back then there were only rough dirt roads everywhere until you got close to Grand Junction.  Twice a year my parents drove to Grand Junction by team and wagon. It took us one day of rough travel to get there, where we stayed in boarding houses or with friends. After we loaded the supplies we needed to last six months, it would take two days to get home. We camped overnight at the top Little Park Road. Our hardest trips were driving the cattle to town.”

The last of six Roehm children, three boys and three girls, Anna remembers, “We all grew up on this land, “ which has been owned by Anna’s family for over 100 years. “My parents, John George and Amy Roehm, homesteaded 650 acres, and my maternal grandparents, David and Sarah Eachus, homesteaded what is now the Minehart Ranch. I remained here to take care of my parents. My father came from Germany and became a naturalized citizen in 1901.“ His naturalization document hangs on the wall behind Anna as she tells of going up to fifth grade at Coates Creek School, riding in a wagon or on a horse or mule to get there. “There weren’t power lines out this far until the 1950s.” She also remembers carrying water up from the spring every day until they got water pumped into the house during the winter of 1961. “Even then we were heating it on a wood stove until the late 1970s when we finally got a water heater.”  It wasn’t until the late 1980s that they got an electric stove.

“I was married at 27 and began raising my three children [Zane, Michael and Shownda]. While my husband went off to work in town, I covered the ranch chores.” She recalls loading the children into the truck on cold winter mornings and driving out to feed their 40 head of cattle.  Each day during the winter months she went out with a hay saw to cut off chunks of frozen, piled hay, then pitchforked the sawed chunks into the bed of the truck and drove to the feeding area. “I’d stand in the bed in the freezing cold and throw it out to our hungry herd. It took several hours each day to feed the cattle before I even got to the regular house chores. I raised my kids in the cab of that pickup. I was taking care of my mother who lived to be 103 and 3 months, so Grandma was in the cab, too.” She admits, “My children are my greatest blessing.”

Once her children were grown, Anna took care of chronic alcoholics in the 70s and 80s to help Dr. Joseph Lehmkuhle. She put trailers on the ranch and fed as many as 37 men at one time. “The idea was to keep them miles away from temptation so that they could recover.” Anna smiles with a sense of pride for her part in that work. When they wanted to enlarge the program, she decided it was time to focus on maintaining the ranch.
Mike has taken the reins of the ranch with its 100 head of cattle, while Anna tends her 75 chickens since her eyesight and hearing limit her other work. These days Anna has her 3-year-old chihuahua as her constant companion, and enough indoor and outdoor cats to keep her busy. Her friendly hound and 12-year-old dachshund serve as her official greeters.

This pioneer lady who has withstood the elements, loss of family members she cared for, and advancements she has had to adapt to smiles as she tells us about her upcoming annual trip to Georgia with Mike to hunt white-tailed deer and visit friends. “It may be a little hard on my back riding straight through, but I do enjoy it.”

Anna loves the land, her ranch and its history. She “wants to keep this area the way it is. You can see wildlife here every day.” What she likes best is the “freedom of living out here with the openness and not having neighbors living on top of you.” Anna Lawson appreciates the advancements since her childhood and will never stop working on her ranch with Bieser Creek running through it. She wants it to remain as open and free as it is now. With a twinkle in her eyes, she adds, “This place is so beautiful that it has easily been worth working through the hardships. I wouldn’t have had it any other way.”