Field to Fork CSA: Local Agriculture in the Grand Valley 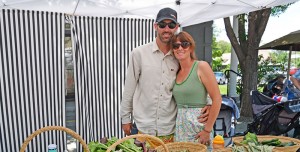 Scott and Jessica Washkowiak know the importance of conservation to the future of farming.  In 2012, the young couple, who operate Field to Fork CSA (Community Supported Agriculture), began working conserved land owned by two of Mesa Land Trust’s founders, Mike and Blakely Mechau, near Palisade. 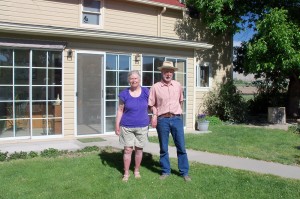 In 2005, the Mechaus placed a conservation easement on 20 acres of farm land through the Mesa Land Trust. This conservation easement ensures that this acreage will always be used for farming and will never be developed for housing or commercial use. Located in the Palisade area, the Mechau property is one of about 47 family farms that make up that spectacular pastoral view that reminds us of the Grand Valley’s agricultural heritage and the abundance of our own locally grown food.

Farming conserved land is particularly important to Scott and Jessica. They are not only farming for today’s families and youth, but for future generations. “We have a desire to steward the land and leave it more fertile and more beautiful than when it was in our hands, and we hope to teach others the art of land stewardship.”

Scott, originally from Illinois, grew up around large agriculture, attended Colorado State University and studied Landscape Horticulture. While living in Fort Collins on a small Bio dynamic Organic Farm Scott realized that growing food was his true desire in life.

In 2008, Scott and Jessica moved to San Diego where Scott worked on a 10 acre Organic Farm and learned many cutting-edge, larger scale vegetable growing techniques. During this time, the Local Food Movement and CSA (Community Supported Agriculture) farms turned a corner as more and more people wanted to buy their food directly from farms.

Scott and Jessica quickly saw the benefits of the CSA model for small farming and found the idea of having a relationship with their consumers and supporters very appealing. They moved back to Colorado, agreed to lease farm land from the Mechaus, and started Field to Fork CSA in 2012.

The CSA’s use of Organic and Biodynamic farming methods ensure long term health of the soil and the land. “We amend the soil with compost and green manures that will help build the soil. We rotate out crops and one crop will never be grown in the same spot twice. We use compost teas as foliar feeds to give the plant nutrients and it is also a great insecticide that helps insects from forming. We plant and sow our seeds to the lunar phase of the moon which helps the plants grow in the correct time of the year.”

The Field to Fork CSA currently serves 100 families, a few small restaurants including Bin 707 and Café Sol, and the Palisade Farmers Market on Sundays. They estimate that their organically grown fruits and vegetables reach approximately 1000 people weekly during the growing seasons!